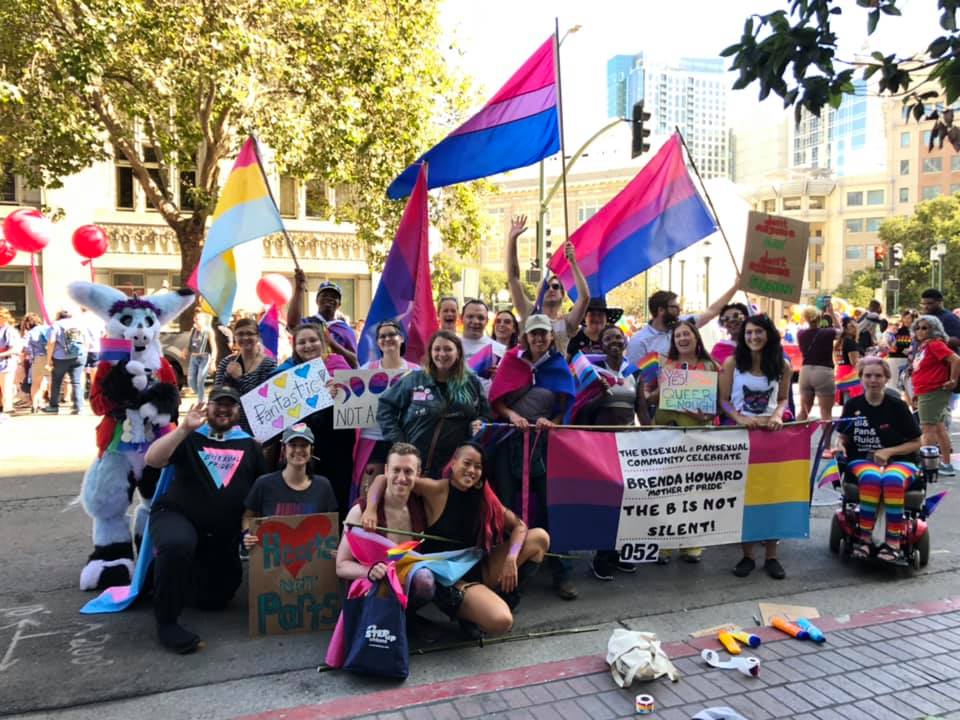 The bisexual community has had a growing presence in the Bay Area since the mid-sixties. Out bisexuals within the Sexual Freedom League; National Sex Forum; San Francisco Sex Information; the Institute for the Advanced Study of Human Sexuality; the Radical Therapy Collective; the Gay Liberation Front; and the Peace, Civil Rights and Women's movements built the foundations upon which the Bay Area Bisexual Network (BABN), BiPOL, Bi-Friendly; and BiNet USA now stand.

The groundbreaking, volunteer-run San Francisco Bisexual Center opened its doors on Hayes Street in 1976, offering support groups, counseling services, social events and a newsletter, and publicly aligned itself with the gay movement. In March 1983, as the reality of 'gay cancer' dawned, a small band of out bi activists within the lesbian and gay communities founded BiPOL, the first bisexual political action group in the USA. At the forefront of early sex-positive HIV / AIDS awareness and education programs, bi men and women were a driving force in what was to become the San Francisco Model. With the greater stigmatization of bisexuality and the increasing involvement of bi activists in HIV / AIDS prevention work, and bisexual men getting sick and dying the Center was drained of the volunteer energy necessary to keep it open, and shut its doors in 1984.

Founded in 1987, BABN helped fill the vacuum left by the closing of the Bisexual Center. Local activists, including Ann Justi and Dr. Maggi Rubenstein, had attended the East Coast Bisexual Network Conference in 1987. Inspired by what she saw, Ann decided that the Bay Area should have a similar network, and began organizing. For nearly 10 years, BABN coordinated a speaker's bureau, a newsletter, retreats, and monthly cultural and educational forums. BABN's phone line offered one of very few ways for isolated bisexuals to find and connect with bi community.

Bi-Friendly was founded in 1988 as a way for bisexual and bi-friendly people to meet and socialize outside of bars and activist meetings. The founders advertised in the local papers and took over several tables at the same cafe one evening a week. The group sponsored brunches, trips to the redwoods, movies, plays, baseball games etc. Anyone who wanted to plan an event placed it in the Bi-Friendly monthly calendar of events, which was mailed out and distributed at the weekly gathering.

From the early-mid 1980's through the 1990's BiPOL was the political arm of the community, BABN the educational voice and Bi-Friendly the social group. Many people have been active in all three groups. The BABN newsletter transitioned in 1991 into the magazine Anything That Moves: Beyond the Myths of Bisexuality, a nationally distributed publication.

With help from the Boston Bisexual Women's Network, which issued a flyer at the 1987 March on Washington for Lesbian and Gay Rights asking if bisexuals were ready for a national bisexual organization. BiPOL provided their address for the flyer and handled the response, which led to coordinating the first National Bisexual Conference in 1990 at Mission High School in San Francisco, as a way to facilitate the work of organizing a national bisexual organization. A conference track was designated for this purpose. The conference drew 460+ people from 20 states and 5 countries. Bi-Friendly gave several "how to create a Bi-Friendly in your town" workshops, which resulted in Chicago, Washington DC, Berkeley, Palo Alto/South Bay, and Marin organizing their own groups.

Throughout the 1990's, under the leadership of Lani Ka'ahumanu, members of BiPOL and BABN worked with BiNet USA to build a visible and viable bisexual movement by educating and challenging lesbian and gay organizations locally and nationally about the necessity of including bisexual (and transgender) people in their mission statements and their work. The need for inclusion of bisexuals was brought home in 1991, when the fundamentalist Christian Right authored statewide anti-gay initiatives beginning with Amendment 2 in Colorado that included gay, lesbian AND bisexual in the language of the initiative. It was clear that bisexuals were seen as threat to so-called traditional family values, just as gays and lesbians were. This initiative was used a 'boiler plate' for other statewide initiatives and was also used by activists to leverage visibility within the gay movement.

BiPOL mobilized a successful 12-city endorsement campaign to have 'bisexual' included in the name of the 1993 March on Washington for Lesbian, Gay and Bi Equal Rights and Liberation. With 'bisexual' added to the name of the national civil rights march, and the Right's addition of bisexual to their anti-gay initiatives, the bisexual movement took its place at the national table. From this time forward, the gay and lesbian liberation movement began to shift to include both bisexual and transgender people, hence today we have the lesbian, gay, bisexual and transgender (LGBT) community and movement.

In 1997 a longtime San Francisco BiPOL / BABN activist was elected to the board of the National Lesbian and Gay Task Force (NGLTF), now simply known as the Task Force, the first out bisexual to be elected to any national gay organization's board. BABN members created courses with bi-specific content at Harvey Milk Institute in San Francisco; served as panelists at numerous conferences, including NGLTF's Creating Change and annual conferences organized by Parent's Family and Friends of Lesbian and Gays (PFLAG), Out At Work, and the Gay, Lesbian & Straight Education Network; co-edited a queer internet research guide published by Haworth Press; and began working with NGLTF's Policy Institute on a new publication about ﻿Bisexual Health﻿ in 2007.

Also during the late 1990's and early 2000's, local activists Lani Ka'ahumanu, Mellissa White, Juba Kalamka,
Gerard Palmeri, Jack Random, Joe Holt and others restructured BABN and formalized its mission: to develop a healthy, vibrant, multicultural bisexual community in the San Francisco Bay Area and to promote better understanding of bisexual lives and issues within the larger lesbian, gay, bisexual, transgender (LGBT) community, and the public. To fulfill this mission, BABN's co-directors and volunteers worked to coordinate and integrate existing services of bisexual groups in the Bay Area, to develop new services as needed, to create close connections among activists and organizations concerned with bisexual issues, and to educate other LGBT groups and the public about these issues. Our San Francisco social the 'Bi Brunch' was born in 1998 and drew about 10-25 people during its height, including local and visiting bi activists, artists and writers, to various restaurants in the Mission and Castro area, and eventually moved to the Outer Parkside neighborhood in 2015.

In June of 2002, BABN obtained its first office in the new San Francisco LGBT Community Center. As measured by subscribers to our email list, there were 79 members of BABN at the time. In November 2002, services included information & referral by phone and in person during drop-in hours 2 evenings each week (as well as by email), cultural / social events at the Community Center, weekly social brunches, an informational web site, and an email list for event announcements and discussion of regional bi issues. [due to losing some very integral volunteers, the drop in site was rented out to another agency, and was eventually dropped completely in 2007 in favor of a postal mail box.]

BABN's first event at the SF LGBT Center was an Ice Cream Social held in honor of International Celebrate Bisexuality Day, September 23, 2002.  Our second event at the Center was Bi and Free: Coming Out of Every Closet, a panel discussion in honor of National Coming Out Day in October of 2002. We also offered a mixed-gender, drop-in, peer-led monthly support group, at the San Francisco LGBT Community Center, off and on from  November of 2002 to April 2012. In 2009, Joe Holt passed and in 2011 Jack Random passed away as well. Both bi+ men had been fixtures at events and had hosted brunches for the bi+ community in the SF Bay Area.

In 2009, Martin and Shelli Rawlings-Fein began coordinating the brunches, socials, soirées and after 2011 the mailing lists, website and volunteers. From 2009 through 2019 ​BABN supported monthly Brunches for the Bi and Trans Communities, monthly Bi+ Drop-In Support Groups at the SF LGBT Center, an informational web site, and email lists for event announcements and discussion of regional bi+ issues.

In 2013, the Obama White House worked with prominent bisexual organizations Bisexual Resource Center and BiNet USA, the national network of bisexual organizations to host a roundtable and reach out to bisexual community. Bay Area bi+ leadership including Martin Rawlings-Fein, Emily Drennen and Lindasusan Ulrich, Juba Kalamka and Lani Ka'ahumanu attended the roundtable and in 2015 attended a subsequent White House Bisexual Community Policy Briefing. In 2016, the last Bisexual Community Briefing on policy and cultural issues of significance for the American bisexual community and was livestreamed by the Obama White House.

​In 2015 through 2019, BABN brought together organizers and leaders from the  Anything That Moves days, Anne K.M., Kai MacTane, Juba Kalamka, as well as SPECTRUM Queer Media founder Kin Folkz, and BiBQ co-founder Allegra Hirschman. In connection with our other community stakeholders, BABN leaders consulted on whether the network should be a nonprofit or continue as a network of groups. It was decided that BABN should continue as a loose network of groups to organize the SF Pride Parade bi/pan+ community contingent rather than work toward nonprofit status.

​BABN was only one of several bi organizations active in the Bay Area during the last three decades including various private bisexual and bi-supportive women's social groups, the Fence Sitters' Lounge (founded 2018), a private trans supportive mixed gender social group, the two other important organizations are South Bay Organizers and Activists (SoBOA is available online currently as well as a group at the Billy DeFrank Center) and the independent groups known collectively as Bi-Friendly (founded in 1988) (with Bay Area branches in the East Bay, South Bay and Marin), whose history is described above. Like BABN, SoBOA worked to network and organize bisexual activists regionally, whereas Bi-Friendly, and Fence Sitters' Lounge are social gathering and networking groups. SoBOA's area ranged from San Jose to Santa Cruz, while BABN's area included San Francisco and nine surrounding counties.

Since June 2019 BABN has been defunct. There are still open groups like the Fence Sitters' Lounge,  Oakland LGBTQ Community Center's Bi / Pansexual peer group, the Billy DeFrank LGBTQ Community Center's Bisexuals and Friends meetup and the Bi Women's Book Club w/ Potluck that foster community and use the BABPN Facebook page for outreach. As of fall of 2019 there is a new annual conference in the Bay Area,  SF*EB BiCon, a conference and event series for people who are attracted to more than a single gender. In 2022, the organizers of SF*EB BiCon started a new Facebook group called Bay Area Bi+ & Pan Network to reflect the surrounding community and organize SF and Oak Pride as a community event. It traces it's roots from BABN and the volunteer-run San Francisco Bisexual Center from Hayes and Masonic Streets in 1976. The Bi+ community has had a presence in the bay area continually since the 70s, a fact that cannot be changed no matter the erasure.