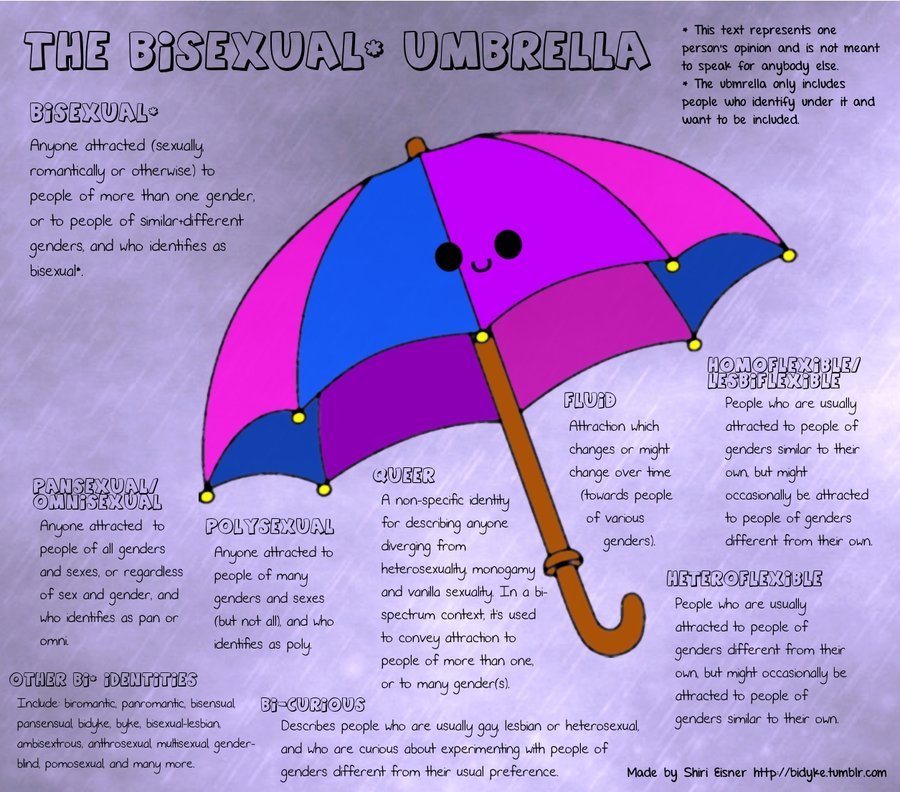 A person who has the capacity to form enduring physical, romantic, and/ or emotional attractions to those of the same gender or to those of another gender. People may experience this attraction in differing ways and degrees over their lifetime. Bisexual people need not have had specific sexual experiences to be bisexual; in fact, they need not have had any sexual experience at all to identify as bisexual. Do not use a hyphen in the word "bisexual," and only capitalize bisexual when used at the beginning of a sentence.
We use the term “bi” “bisexual” and “bi+” to mean anyone who is attracted romantically and/or sexually to more than one gender, otherwise called “non-monosexual” or “middle” identities.

Pansexual
Some people who have the capacity to be attracted to people of any gender may consider themselves part of the bi+ community and/or choose other words to describe their sexual orientation, or identity labels like
pansexual, polysexual, omnisexual, ambisexual, fluid, queer, and more.  The phrase "hearts not parts" is often used in conjunction with pansexuality, as gender and sex are not determining factors in their romantic or sexual attraction to others.

An adjective used by some people, particularly younger people, whose sexual orientation is not exclusively heterosexual (e.g. queer person, queer woman). Typically, for those who identify as queer, the terms lesbian, gay, and bisexual are perceived to be too limiting and/or fraught with cultural connotations they feel don't apply to them. Some people may use queer, or more commonly genderqueer, to describe their gender identity and/or gender expression (see non-binary and/or genderqueer below). Once considered a pejorative term, queer has been reclaimed by some LGBT people to describe themselves; however, it is not a universally accepted term even within the LGBT community. When Q is seen at the end of LGBT, it typically means queer and, less often, questioning.

Fear of bisexuals, often based on stereotypes, including inaccurate associations with infidelity, promiscuity, and transmission of sexually transmitted infections. Intolerance, bias, or prejudice is usually a more accurate description of antipathy toward bisexual people.

How the Marriage Equality Movement is Leaving Bisexuals Out
​by BiPOL, a bisexual feminist political action group founded by Lani Ka'ahumanu in 1983.